Yale Center for the British Arts, New Haven, Connecticut. WFP is proud to be actively involved in the second phase of construction currently underway at this Center. Upon completion, the renovation will allow the Center’s renowned collection of more than five centuries of British Art to be experienced in the building as Louis I. Kahn originally envisioned it, bringing vital systems, spaces, and amenities with the Center to State of the Art standards (the first of its kind in the United States). WFP provided demolition services of the existing fire pump package, and is providing and installing a complete new Peerless 1000 gpm fire pump package while the space is partially occupied. Additional information can be found at: //britishart.yale.edu/architecture/building-conservation-project

Wolverine has also recently extended its relationship with McCarthy Mortenson in support of a new ~700,000 gsf Research Facility in Kansas intended to conduct comprehensive research, develop vaccines and anti-virals, and provide enhanced diagnostic capabilities to protect our country from numerous foreign animal, zoonotic and emerging diseases. Additional information can be found at: //mcmjv.com/about-the-project/

Wolverine began work in Florida with Bombardier Learjet in 2008, and has expanded both its service offerings and support geographically to Bombardier. Wolverine is currently supporting Bombardier in Florida, Texas, Illinois, Arizona and Connecticut with inspections, testing and maintenance, hangar upgrades, fire alarm systems, etc.

Michigan State University, Facility for Rare Isotope Beams (FRIB), East Lansing, Michigan: FRIB will be a new scientific user facility for nuclear science, funded by the Department of Energy Office of Science (DOE-SC), Michigan State University (MSU), and the State of Michigan. Currently under construction on campus, and operated by MSU, FRIB will provide intense beams of rare isotopes—short lived nuclei no longer found on Earth allowing scientists to get a better understanding of the physics of nuclei, nuclear astrophysics, fundamental interactions, and applications for society. This facility is another project that WFP is proud to be a part of. WFP has been successfully providing fire protection and related services on MSU campuses for the last decade. 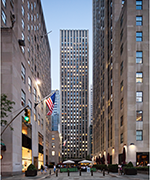